Getting to Know Generation Z 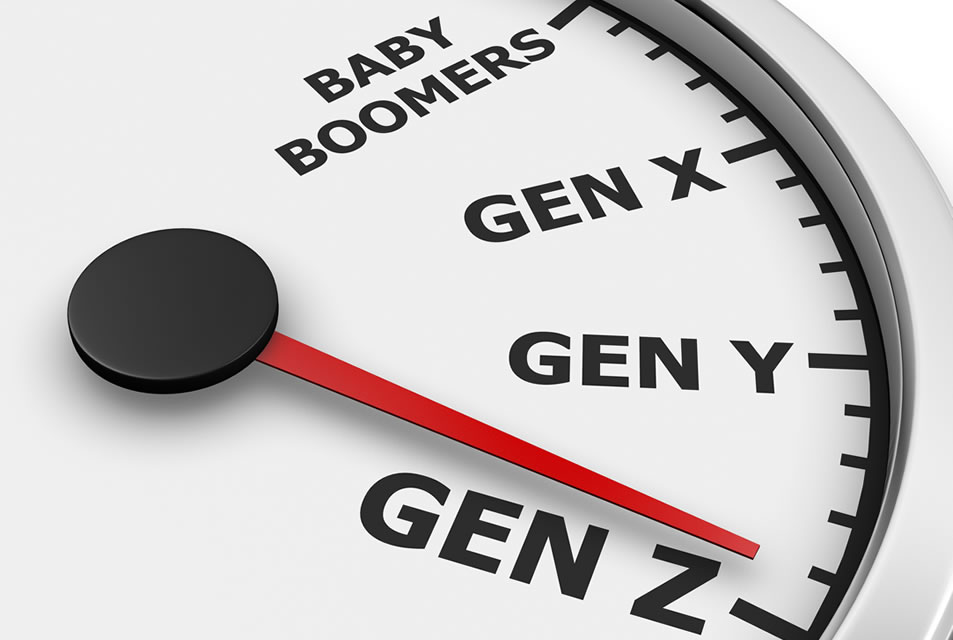 When Audrey Boone Tillman entered the Westin Charlotte Hotel in 2007 to judge a regional competition of college students’ community outreach projects, she noticed one big change from similar events she had attended in the past. “No one had paper resumes,” recalls Tillman, executive vice president of corporate services at Columbus, Ga.-based Aflac Inc., which has approximately 4,600 U.S.-based employees. “It was entirely paperless.” Tillman scanned the sea of students toting curriculum vitae around on thumb drives, and saw a snapshot of how tomorrow’s employees would communicate and work.

Observing that sight sent a clear message to Tillman, she says now.
“If, as an HR team, you’ve been out of touch with college-age students, then you’re missing something. The way they work is different, and they’re going to change the workplace.”

Take heed, HR leaders: Members of this age cohort — born between 1990 and 1999 and frequently referred to as Generation Z — are graduating high school and college, and are already entering the workforce.

At 11 million strong, the 16-to-23-year-old members of Gen Z comprise nearly 7 percent of the North American workforce of nearly 156 million, according to an analysis of U.S. Bureau of Labor Statistics data, conducted by New Haven, Conn.-based RainmakerThinking Inc. The same analysis projects that number will reach 20 million by 2015, 25 million by 2017 and 30 million by 2019.

And, as was the case with the millennials, Gen Xers and baby boomers before them, employers will have to find ways to maximize the potential of a generation with its own strengths and weaknesses, idiosyncrasies, goals and approaches to work. For HR leaders, attracting and getting the most out of Generation Z may require adopting strategies that combine the new with the tried and true.

The Way They Work

Of course, Gen Z workers aren’t completely different animals, says Bruce Tulgan, founder of RainmakerThinking and an author and speaker on young people in the workforce. “What’s different is what’s going on in the world now, compared to what was going on in the world in, say, the mid-to-late 1990s, the mid-to-late ’80s [or] the ’60s and ’70s. “Most people in the workforce today are thinking more and more like free agents; thinking more short-term and transactional,” says Tulgan. “But Gen Z — and Gen Y, largely — have never known it any other way.” The shift from Gen Y to Gen Z “is a matter of degree,” he says. “What [Generations] Y and Z typically have in common [is] they expect a lot of support, guidance and direction from older, more experienced people in authority roles.”

Both generations also place a premium on doing something they love for a living. For example, 50 percent of Generation Y teens in 2010 said they wished they had a hobby that would turn into a full-time job, according to the Bedminster, N.J.-based Intelligence Group. Among Gen Z teens, that number rose to 76 percent in 2013. Where these two groups diverge is in their mind-sets regarding employment prospects, says Tulgan.

“The biggest difference between [Generations] Y and Z is the fluctuation in the labor market,” he says. “The expectations of Generation Z are those of much less labor-friendly job markets. Generation Y’s expectations were shaped by a booming employment market, and then the rug was pulled out from under them in the early parts of their careers. But Gen Z has only known this labor climate.”
Indeed, the Great Recession has forced many young job seekers to scale back the salary requirements and other demands that previous generations felt more emboldened to make.

While willing to forego big salaries, members of Gen Z — much like millennials — are firm in their need for flexibility, says John Males, founder and president of Fathom Corporate Training in Austin, Texas. “Not having work/life balance is definitely not an option for this generation.”

A recent Ernst & Young study suggests as much. In 2013, the New York-based professional-services firm surveyed 1,215 cross-company professionals, evenly split across three age groups: ages 18 to 32, 33 to 48 and 49 to 67. Among 18-to-32-year-olds, flexibility was the most important non-cash perk on the job, with 38 percent citing a lack of day-to-day flexibility as the factor most likely to make them leave their current jobs.

This generation also “desires a menu of choices” in terms of how it works, says Males. “Personalization is the name of the game in so many areas these days,” he says. “We personalize electronic gadgets with both accessories and apps. You can further apply this thinking to the work environment.” For instance, many employers may feel the use of social media at work will reduce productivity, he says. “However, using social networks such as Facebook, with access to instant messaging, Wikis and YouTube can mean the real integration of this media right into the workflow. [Or] it may simply mean the ability to work while connected to media with headphones.”

Because Gen Zers are digital natives, technology is second nature to them. Employers know this, of course, and many have already jumped on the social-media-recruiting bandwagon. But, while social-media networks are certainly a critical component of attracting Gen Z talent, reaching this group requires more than just creating a Facebook page and scouring LinkedIn for job candidates.

KI Furniture has turned to video-sharing avenues to reach this demographic, says Jill Hummel, HR business partner with the Green Bay, Wis.-based contract furniture provider, which is home to roughly 3,000 employees. Hummel and the HR team helped create a series of YouTube videos that showcase the company’s culture as well as its products, she says. “We’ve put together some videos showing that KI can be a fun place to work. Let’s be honest: Kids aren’t coming out of school saying they want to work for a contract furniture provider. We’re kind of livening things up to make the industry more appealing.” KI doesn’t spend its entire recruiting budget on creating YouTube videos, however. In the last two to three years, it has “spent more time at college job fairs throughout the Green Bay area,” says Hummel, noting that KI routinely attends fairs at schools including St. Norbert’s College as well as University of Wisconsin campuses in Green Bay, Oshkosh, Milwaukee and Madison. The company is currently focusing on its inside sales team, which is comprised mostly of boomers nearing retirement age. Young, recent college grads figure to be viable candidates as KI restocks its sales talent pool in years to come, says Hummel. In search of such talent, KI recruiters make approximately 12 visits to college campuses each year, with plans to increase that number “as we work specifically to recruit younger generations going forward,” she says. On campus, KI and Hummel participate in mentor panels and mock interviews, creating hypothetical interview scenarios to gauge participants’ readiness for employment. “We interview a lot of students nearing graduation,” says Hummel. “They get a description of the job, and we interview them as if it’s [a] real [interview]. We tell them what they did well, and what they need to improve on.”
This sort of instant input is typically well-received by Gen Z-age interviewees, who desire continual feedback, she says.

Aflac’s HR and university relations teams rely on a similarly up-close-and-on-campus technique, says Tillman. “We start on campus,” she says, “before we start bringing them in for interviews. And, we have changed our strategy somewhat, to not just be physically present at recruiting fairs, but to host events that are meaningful to students.” For example, “now we’ll host a coffee break or an ice-cream break during exams. We’ll bring in Starbucks, for example. It’s on us, and it’s something that really brings out students. And it’s an additional mechanism to introduce the company. “And we’re not talking thousands of dollars [spent by Aflac],” she adds. “Something like sponsoring a coffee break during finals or a back-to-school ice-cream social goes over really well [with this age group], and helps extend our brand.”

No high-school or college graduate enters the workforce as a fully formed, polished employee, of course. For Gen Z workers — who have spent a lifetime interacting via email, IM, text messaging and social media — “real” communication skills are often seen as a particular weakness. “This reliance [on technology] may prevent these individuals from developing the types of interpersonal, communication and social skills required to succeed in a traditional workplace,” says Andrea Kane, senior vice president and chief people officer at Atlanta-based Manheim and AutoTrader Group, an Atlanta-based physical and digital automotive marketplace with 20,000 employees worldwide, and 3,500 within AutoTraderGroup.

At Manheim and AutoTrader Group, equipping these fresh-faced additions with the necessary skills includes a blend of online and mobile training, career and development activities within the company’s internship programs, and real-time job aids to meet learning needs, “for those seeking more specialized training,” says Kane. Manheim has also launched its Classroom 2 Cubicle series, which provides interns with time-management and personal-effectiveness tips, help with verbal and written communication skills, and instruction in conflict-resolution techniques. Although the series is technically just for interns, part of the idea behind it is to help turn these Gen Z-age interns into full-time employees when they graduate.

This shift, however, can be a difficult one to make. At Aflac, “we’ve seen this generation is challenged in making the transition into the corporate workforce,” says Tillman, noting that about 3 percent of the company’s current employee population is between the ages of 18 and 24. Verbal communication, for one, is a common challenge among this group, she says. “We’ve seen smart and talented young professionals struggle with confidence during one-on-one interactions with colleagues and supervisors, for example.” In addition, she says, “Gen Z tends to be more informal, and wants more immediate feedback than previous generations — most likely due to the fast-paced world in which they’ve grown up.”

To accommodate this desire, Aflac has a “focused training and activities schedule” to acclimate college hires into the company’s culture, she says, noting that Aflac’s university relations team continues meeting with these newly hired employees on a monthly basis “to provide personalized feedback and guidance to ensure success in a corporate environment.” The organization has also initiated the Aflac Bright Ideas Program to solicit suggestions from employees (of all ages) on improving customer service, increasing employee engagement or making work processes more efficient. The formal initiative has yielded some very informal — and ultimately very successful — suggestions from and for Gen Z-age employees, says Tillman. So far, “one of the most interesting things to come from the program was our company kickball team,” according to Tillman. “A young man came to me and talked about how much he enjoyed playing kickball in college. And he asked if we could start a kickball team here in Columbus.” Since the team’s formation, the squad has won two league championships, and has done much to increase engagement and camaraderie among the young players comprising the team’s roster, says Tillman. “The team is all made up of young employees,” she says. “For them, they can go out and party afterward, and other employees come to watch the games. It’s a lot of fun, and our employees really get to interact with each other. “Who would have thought we’d have a kickball dynasty?” she says.